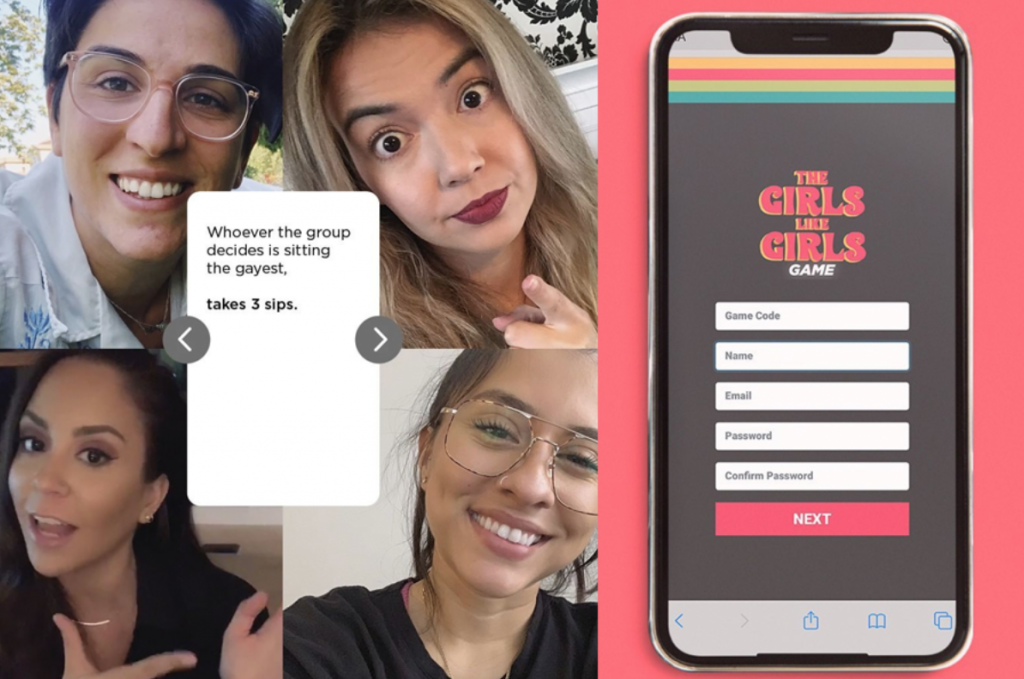 We’re here. We’re queer. And we’re bored in the house, bored in the house, bored. If you’re a lesbian of any age and have not experienced TikTok during this quarantined season of our lives, you’re missing out. The lipsyncing platform may have been made for Gen Z’s capacity to write, produce and edit all their own content, but we all know the gays made lipsyncing happen. Tiktok lesbians own my feed. Maybe it’s because I’m a lifetime of starved for authentic queer content. Maybe it’s because, dare I say, content so purely gay has never existed with such easy access. No straight people are involved in the making of any lesbian TikTok content. So when I saw that one of my favorite TikTok lesbians created a drinking game for lesbians, my hand started making the sign of the cross before I could stop myself.

Annie is the high-femme, quick-witted lesbian known for celebrating her queer friends’ successes, her drunk Amazon purchases; and she basically owns the niche on memorializing the sexual tension between Sandra Oh and Judie Comer on “Killing Eve.” What did Annie do with her quarantine? She rushed out a digital copy of her gay drinking game, originally meant for Pride season. “So this whole time we’ve been in quarantine,” she told her followers, “I keep thinking about queer people who live with their parents or people who they can’t fully be themselves around. It’s not like they can go to gay clubs. It’s not like they can go and hang out with their friends. So I decided to create something that’s hopefully going to help. I made a card game!”

Of course, I immediately started playing. The game is “inspired by all your ex-girlfriends,” according to its website [link] and is “the gayest drinking game you’ll ever play.” With directions like, “If you’re vegan or vegetarian, take two sips” and “If you’re wearing checkered Vans, Take 2 sips, you raging homosexual,” bet I was drunk laugh-crying real quick. One card told us to, “tweet about how Cadet Kelly is a lesbian film,” and then take two sips. Let me tell you that dozens of lesbians took to Twitter already to do just that. 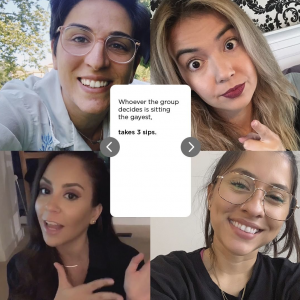 I reached out to the creator to ask how she came up with the idea and her answer was way more tender than I expected. “I remember the first place where I felt seen was Tumblr,” she told me, confessing that she went looking for Brittana fan pages, of Glee’s lesbian couple Brittney and Santana. “I became obsessed. It really ignited my love for the Internet because you can be anyone you want to be,” Annie posited. I felt that. We’re socialized to warp and twist the most natural parts of ourselves in order to fit into society. Finding that space where you can stop holding your breath and let all that gay air out is sweet relief.

When it became clear that COVID-19 would change society as we know it, Annie thought of all the quarantined kids stuck in non-affirming homes. “Now that I’m out, I’m so blessed to live by myself,” she said while cooing over her quarantine partner, a rescue dog named Tater Tot. “I can’t imagine college kids going back home and being stuck with their homophobic parents. They can’t go out. They can’t go to gay clubs.” So, she scrapped her business-as-usual plan to release the physical game in time for Pride and rushed to create a digital version. “Now, they can celebrate their identity while safely practicing social distancing,” she happily told me.

The response has been overwhelming. A student messaged Annie to tell her that her school’s queer club was going to play the game that night for their weekly meeting. Dozens of people also commented on Annie’s TikTok to lament their lack of queer friends. Now, some of them are playing together–creating their own queer community over a glass of wine and a couple of hours playing “Girls Like Girls.” 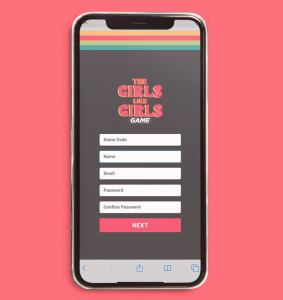 The game is called “Girls Like Girls,” but it’s more bi- and gender-inclusive than you think. The cards intentionally avoid pronouns altogether or default to “they/them.” When asked if the game is “lesbian-specific,” Annie says no because it’s for bi and pansexual folks, too. It’s also advertised as “The Girls Like Girls Drinking Game,” but the statistics about our community’s mental health are legit sobering; “Don’t drink alcohol? No worries, play with any drink of your choice,” the description concedes. Do I have an entirely separate vegan root beer float “Girls Like Girls” party scheduled after my whiskey drinking party? Yes. Yes, I do.

Get the game here. 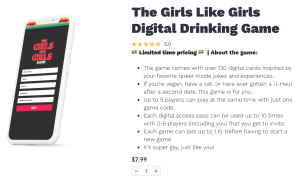 Oh, and for all the boys seething with jealousy, don’t you worry. “Boys Like Boys” is currently in production by a team of queer boys thinking of you. 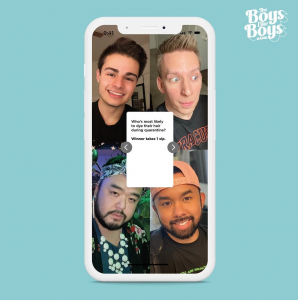 In the parting word’s of Annie’s viral TikTok video that ended lesbian quarantine boredom,  “I hope you guys stay safe and gay.”